These days, most cameras fall into one of two categories. DSLRs, which dominated the 2000s and set the standard for consumer digital photography and videography, are now giving ways to mirrorless cameras with stabilized 4K capabilities at increasingly low prices. But there's a third, forgotten camera type: the fixed-lens camera. Offering a single focal length, fixed-lens cameras prioritize straightforward image quality. This makes them ideal for still life photography and other point-and-shoot scenarios where speed is a priority. The Fuji X100T is a fixed-lens digital camera that gives mirrorless and DSLRs a run for their money.

Released in 2015, the Fuji X100T is a fixed-lens digital camera with a 16megapixel sensor. It builds on the design of Fuji's 2011 camera FinePix X100, which was one of the first popular prime lens cameras to achieve mainstream success. Although they look nearly identical from the outside, the X100T improves on the internals of the X100 in pretty much every way imaginable, making it the current go-to for cameras of its type. 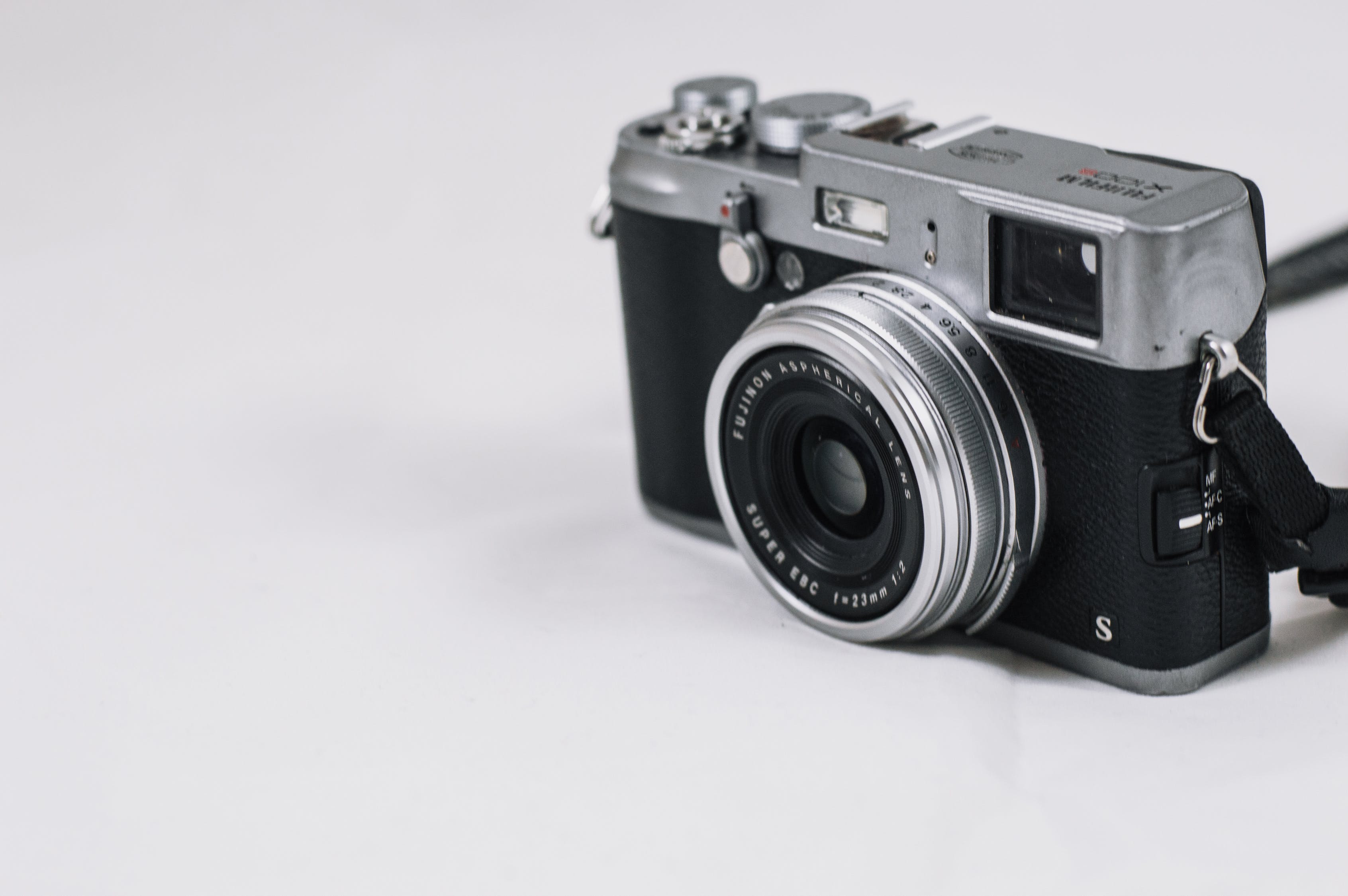 The Fuji X100T has a fixed lens of f/2.0, 23mm (35mm-equivalent). giving you a balanced image with enough versatility for most scenarios in everyday use. It uses a hybrid viewfinder with electric and optical rangefinder options, and comes in an attractive body of die-cast magnesium.

The Fuji X100T makes some small but important improvements on the design of the X100: notably the redesigned hybrid viewfinder. The viewfinder gains a 2.3m dot LCD panel and a darkened tab that pops up in the optical finder, making projected information visible in all lighting conditions. The viewfinder tab is controlled by the small lever on the front of the camera which was used to switch to the electronic viewfinder in previous models.

Another improvement to the body is the fully electronic shutter mode. This mode gives you a completely silent shutter at a maximum speed of 1/32000 sec. The aperture ring can now be controlled in 1/3 f-stops, and the exposure compensation dial now extends to +/- 3EV. Unfortunately, the battery of the X100T hasn't seen any improvement over its predecessors. It still relies on the NP-95 battery, which gives around 330 shots per charge in EVF mode. But luckily it does include an external charger.

The Fuji X100T has some key improvements over its predecessors in the realm of control and flexibility in its features. Now, you can apply exposure compensation when using Auto ISO in manual exposure mode. The back of the camera now has a full control dial, and seven of the buttons are now customizable.

The Autofocus capabilities have been totally redone, including new Face Detection and the option to tie spot auto exposure to selected AF points. Finally, the Fuji X100T has a 'Classic Chrome' simulation mode, which gives shots the appearance of Kodachrome film stock; this and other film simulations can be applied in camera with its RAW converter.

The Fuji X100T has decent video specs, but first and foremost we should say that it isn't designed as a video camera. The fixed-lens limits the kind of flexibility that serious video shooting needs, and it doesn't have a 3.5mm mic jack (though it does have the uncommon 2.5mm jack).

If video is your priority, you should look for a DSLR or mirrorless camera. That said, the X100T does offer 1080p video at up to 60 fps and 36mbps, with control over video including aperture and shutter priority as well as manual focus with peaking. These specs will get you passable video for documenting important moments, but don't expect it to cut it as a production-level camera. 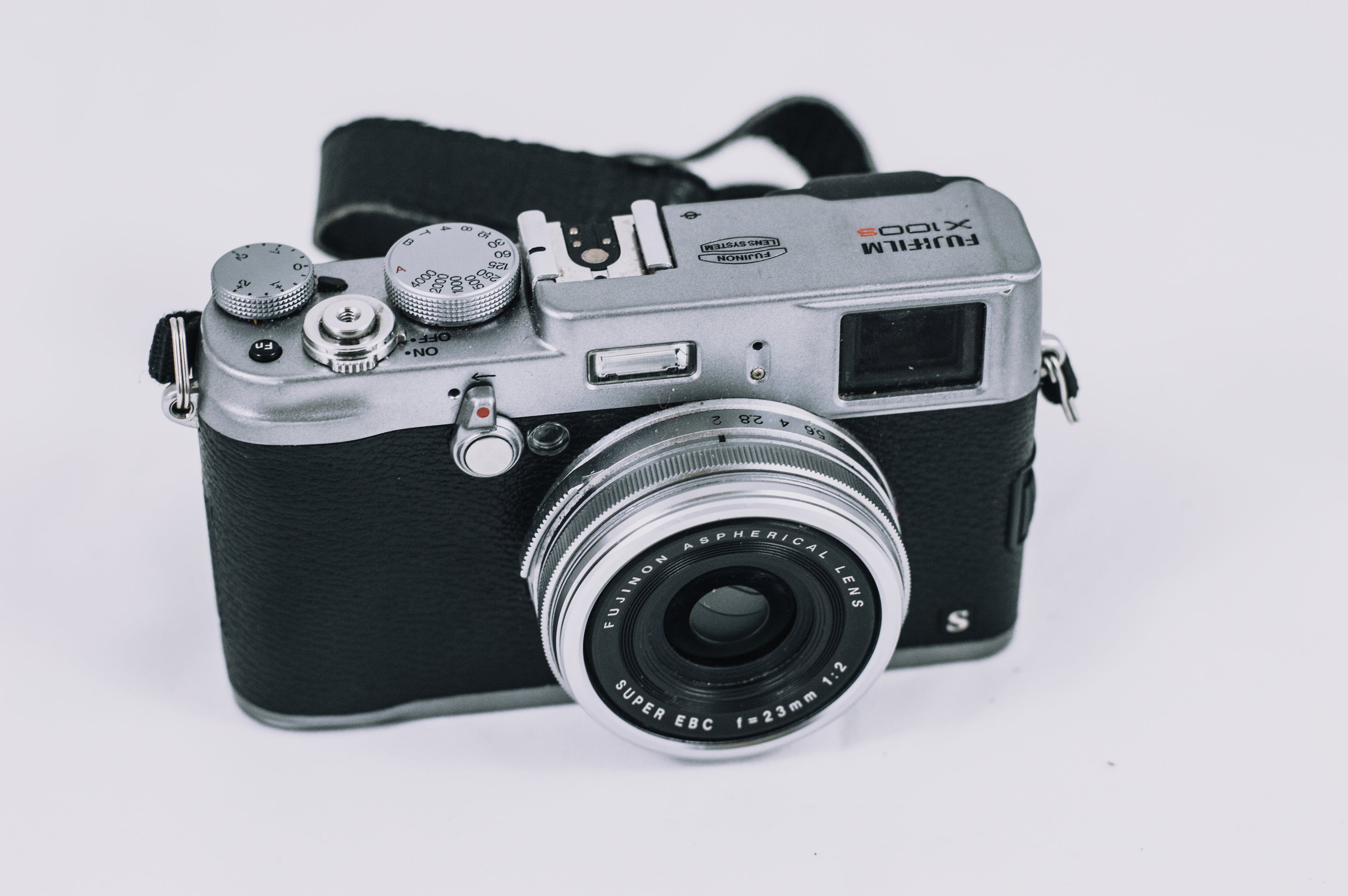 These days, the Fuji X100T can mostly be found used or refurbished on marketplaces like Amazon or eBay. On Amazon, you can fetch one for around $600-650, which is a great deal.

Now that you know about the Fuji X100T, you can see how it compares to other, similar cameras on the market.

The Fuji X100T is a powerhouse of a fixed-lens camera that gives great pictures with great precision. Below, we'll recap some of its features to compare to its competitors (and its successor, the X100F).

The X100T remains phenomenally easy to use. The compact design, easy to navigate settings, and solid auto settings make running-and-gunning a breeze, and you don't need to mess around with changing out lenses or zooming.

The X100T's 16MP CMOS II sensor takes photos of a similar quality to the X100S, although the JPEG compression options have been upgraded. The lens is incredibly sharp, even when wide open, and the color rendition is second-to-none in the industry. The main addition since the X100S is the Classic Chrome Simulation mode, which is essentially a simulation of the famous Kodachrome film stock.

Again, the design of the X100T is mostly the same as previous models, with some small improvements that make a big difference. The biggest is the hybrid electronic viewfinder, which gives you a crystal-clear view of images before you snap the shutter.

The Fuji X100T has a standard one-year warranty, although if you're buying used keep in mind that the warranty will no longer be in effect.

The Fuji X100F is the successor to the X100T, and makes some compelling improvements. Whether or not these improvements are worth the approximately $600 jump in price depends on what you're looking for in a camera.

The X100F retains much of the look of the X100T and the same functionality. Fuji has been steadily improving the X100 series, and the X100F is their most fully realized camera yet. Some improvements in usability include a more precise focus-ring sensor, automatic detection of wide/tele conversion lenses, and a completely revamped user interface. It's easier than ever to use the X100F.

The X100F bumps up the sensor to 24 megapixels, with the cutting edge X-Trans sensor. This leads to much greater detail in Raw files, better noise performance and high-quality JPEGs. There's now a digital teleconverter mode, which takes an increasingly small crop from the sensor and then upscales it to 24MP; which is handy but does lead to some loss of detail.

The dynamic range is excellent and gives you lots of leeway when editing your photos later. the new AF joystick makes autofocusing better than ever. Because of the nature of a fixed-lens camera, video isn't a priority, but it can still shoot clean 1080p video at 60p.

The X100F retains the excellent build quality of its predecessors, down to essentially the same hybrid viewfinder as the X100T. The buttons on the lefthand side of the screen have been replaced by the AF control joystick, which gives you greater freedom to operate the camera with one hand. There's also a front dial added to toggle customizable functions. Also new is the ability to control a parameter using the manual focus ring.

The Fuji X100F has a standard 1-year manufacturer's warranty.

Ricoh GR II is a fixed-lens competitor to Fuji's X100 series which has some advantages that might make it worth considering. For one thing, its 28mm equivalent lens is wider, although the aperture is down to F2.8 compared to the X100T's 2.0 lens. It has some other nice features like Auto White Balance control and Wi-Fi and NFC functions.

The Ricoh GR II is ready to use in around 2 seconds, not terribly quick for this sort of camera but not too slow. Focus speeds are average and shot-to-shot delays are minimal. The auto features will result in pretty solid images, so it's a good camera for beginners.

The GR II produces good quality photos, especially in RAW mode. Exposure is spot on and colors are vibrant. The camera's sensor is 16.9 megapixels and images look sharp, and color reproduction is quite nice. The video quality is also comparable to the X100T at 1080p 30fps, but it still won't make a great dedicated video camera.

The GR II is well-built, though not terribly exciting to look at. The large 1,230k dot, 3.0" LCD display is sharp and has good viewing angles, and the minimal manual controls are easy to access.

The GR II has a standard 1-year manufacturer's warranty.

The Sony RX100 III is a compact camera in a slightly different category than the other cameras on this list. The lens is a zoom, with 24-700m equivalent an a F1.8-2.8 lens, made by Carl Zeiss lenses. The zoom does give you more latitude than the fixed-lens cameras on this list, so if you want more flexibility with similar image quality and simplicity as the fixed-lenses, the Sony RX100 III might be the choice for you.

The Sony RX 100 III is easy to use, using an intuitive Sony interface with customizable menus. The lens has the same smooth-turning control ring as previous models, which is connected to the function in whatever shooting mode you have selected (i.e. it controls aperture in Aperture Priority mode). The function is also customizable on its own. The rear dial can also duplicate the standard function of the control ring, but you have less options for customization.

The RX100 III has a beautifully sharp lens which delivers great results in both photos and videos. For photos, the. Video has three stabilization modes, and a peaking display and zebra pattern for monitoring exposure. The focus peaking is unfortunately rather unreliable. The camera captures 1080p at 60fps, and 120fps at 720p for slow-motion. It also has premium features like a built-in ND filter and can output uncompressed video over HDMI.

The RX 100 III is solidly built like its predecessors. The LCD can flip up 180 degrees, making it easier to view self-portraits, and the design makes navigating menus easy. The electronic viewfinder has an OLED display with 800x600 pixel SVGA resolution and Zeiss T* coating on the outer glass, making the image crisp and clear. The RX 100 III doesn't have a hot shoe, unlike its predecessor.

The RX 100 III has a standard 1-year manufacturer's warranty.

Overall, we'd give the Fuji X100T 4 stars. It remains an easy-to-use, powerful camera for most situations, and it's a great alternative to the dominant choices of DSLRs and mirrorless cameras on the market. If you want a quick, responsive, and customizable camera, you can't go wrong with the X100T. It does suffer a bit in the battery life and video departments, but it shouldn't deter you from checking it out. At basically half of its original price, it's well worth picking up a Fuji X100T to experience the magic of fixed-lens cameras for yourself.