35mm Film Cameras to Fuel Your Passion: Our Top 6 Picks

In a world where anyone can take a picture using the digital camera built into their cell phone, who needs 35mm film cameras? A lot of people, it turns out.

Interest in 35mm film cameras is climbing once again because of a nostalgia for the days of analog. This is happening after a precipitous decline brought on by the development of digital photography and its convergence onto smartphones. It’s similar to what happened years after the introduction of music on compact disc -- younger consumers, curious about a technology just out of reach, caused a resurgence in the sales of vinyl record albums.

The biggest sign this was a trend was Eastman Kodak Co.’s announcement of its plan to re-start production of Ektachrome, a 35mm film stock that’s legendary with professional photographers and advanced amateurs. Look for Ektachrome to be back on the shelf later in 2018. Hollywood even made a movie about its resurgence.

Getting back into traditional film photography doesn’t require a miracle or an expensive investment, just curiosity and appreciation for the way things used to be. While it’s way too soon to hang a “back in business” sign out for film photography, let us introduce you to some of the best 35mm cameras still on the market today.

The 35mm roll of film was the centerpiece of popular photography for more than 100 years. The designation "35mm" refers to the standard size of the film negative. The film is rolled tightly in a plastic canister and is exposed to the lens of the camera one frame at a time. Incidentally, the same size -- 35mm -- is used in the production of motion pictures. That film, of course, is produced in much larger rolls and has also been in steady decline due to digital imaging technology.

You might be asking yourself: I have my smartphone with me almost all the time. I can take a picture whenever I want. And I can also send it via email instantly to all my friends and family. I can even post it on a social network such as Facebook. Why would I want to shoot film, which requires the extra step of film processing? And I'm not even sure I got the shot?

Lots of reasons, experts say. For one, the staff at EyeEm says, 35mm film cameras force you to be smarter about your picture taking. Film limits your chances. If you are limited in each roll to no more than 36 exposures, naturally, you want to make each one count. So you focus more on the fundamentals of good photography.

Another reason is that 35mm film cameras produce pictures that feel more real and authentic to some snapshooters, particularly in younger generations. They see the colors and grit and grains of photographic film as being part of the art. In fact, a small group of enthusiasts recently launched a highly successful Kickstarter campaign with the goal of reinventing the 35mm film camera. Called the Reflex, the group’s goal is to create a modular camera system that would allow today’s photographers to customize various parts to their liking.

Save for the Kickstarter-funded Reflex, few if any companies are building film cameras anymore. They’ve all gone digital. For that reason, you’ll need to get comfortable with the secondary marketplace, including sites such as eBay. Also consider one of the still-existing independent photo stores, such as BH Photo Video and Electronics.

Using 35mm film cameras requires extra patience when you compare them to the instant gratification that digital cameras provide. This is because after you shoot a roll of film, you still have to get it processed and print your pictures. Unless you have a home darkroom, that’s not an easy proposition these days, as digital photography has pushed a lot of photo developing labs to the sidelines. Your best bet is probably to seek out a film-processing service that you can reach by mail, though larger cities will generally have at least one or two labs still operating.

To determine the best 35mm film cameras, we reviewed articles and recommendations from close to a dozen online sites, including Time.com, CNET, and Popular Science. We also reviewed various photo enthusiast sites, many of which concentrate on digital photography. What these sites seem to share, though, is a love for photography and most importantly, a nostalgia for the old days of winding and unwinding rolls of film. These sites include Photophique.com, Digital Photography Review, Tom’s Guide and Expertphotography.com. Finally, to round out our list, we also found recommendations from lovers of gadgets and cool things, including Eyeem.com and coolm​​aterial.com, and crossed checked with reviews on Google.com and Amazon.com.

Given that most companies have stopped manufacturing film cameras, you’ll most likely be purchasing a used model. So you should get to know sites such as Amazon.com, Etsy, eBay, and others that sell second-hand equipment. You can expect to pay about $​ to $​$ for a basic well-used model, and anywhere from $​$ to $​$$ for a more name brand option in good condition. You can also pay less than that, depending on what your goals are.

The 35 mm film camera market was always hotly contested. Companies such as Canon, Nikon, and Olympus produced more advanced models, while Eastman Kodak and Fujifilm targeted the beginner market. Here are six 35mm film cameras that are great options for photographers wanting to take a trip down memory lane. Please note that these cameras are listed in no particular order.

We found the Pentax K-1000 on just about every list we consulted. This camera originally debuted in 1976 and didn’t go out of production for nearly two decades. Interestingly, the K-1000 is a fully mechanical camera, so there's ever a need to worry about battery life!

Another camera you can expect to find on lists of the best 35mm cameras is the Canon AE-1. Interestingly, like the K-1000, it was also brought to market in 1976 and has shown great staying power among photo enthusiasts. One reviewer notes that the AE-1, while it lacked some bells and whistles (such as auto-focus), “was the first camera to feature an internal microcomputer.” Another reviewer says, “The quality of the camera I received was amazing! And it works flawlessly.”

From here on out, our list of the best 35mm film cameras get more varied. The Nikon FM series received plenty of chatter from shutterbugs. Specifically popular for its compact design was the Nikon FM-2, which in its prime was popular with photojournalists, according to one reviewer. The camera was produced from the early 1980s into the 1990s. Another fan describes it as “all the 35mm film camera you really need.”

The challenge of popular photography has always been about making it easier for people to take more pictures. Out of this grew the point-and-shoot category. Users don't have to worry about knowing how to focus. You literally just point and shoot the picture. One compact model that made many lists was the Olympus Stylus, a 1990-eras camera. One reviewer praised the Stylus for its “exceptionally sharp lens” and fixed lens.

The Canon Sure Shot earned a place in the Canon Camera Museum for being the first to offer users lens-shutter auto-focus. Originally produced at the end of the 1970s, the camera was a hit in multiple markets around the world. A recent reviewer describes this camera as “perfec​​t for a digit​​al-phobe.” Another noted the ability of the SureShot to produce dreamy images -- or muddy if you should prefer. 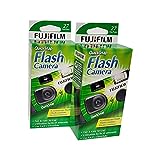 It’s still possible to experience the pleasures of 35mm film without investing a tidy sum to acquire a new piece of vintage hardware. Single-use cameras, which are rolls of 35 mm film built into a cardboard box with a lens, viewfinder and film advance, are still available -- though they will cost a bit more than you might remember. You can find the cameras, from manufacturers such as Eastman Kodak and Fuji, at Amazo​​n.com and stores such as Wal-mart or Walgreens.

Take pictures as you would with a regular camera. After that, rewind the film and take it (or send it) for processing. You'll get back the same high-quality pictures you'd expect from a re-useable 35mm film camera. Single-use cameras remain popular with people on vacation and on special occasions such as weddings. This is because they are easily carried and lightweight. Most importantly, with a single-use camera, you don't have to worry about losing a nice camera or having it stolen.

Available in multi-packs for between $ and $

For hobbyists, you can’t go wrong with any of the brand name cameras. Canon, Nikon, Olympus, and others all made excellent cameras. You'll be fortunate to put one of these in 35mm film cameras in your hands. If you’re just looking to go back to film for fun, try out single-use cameras. They’re easy to operate, highly portable and produce great pictures.

As a participant in the Amazon Services LLC Associates Program, this site may earn from qualifying purchases. We may also earn commissions on purchases from other retail websites.